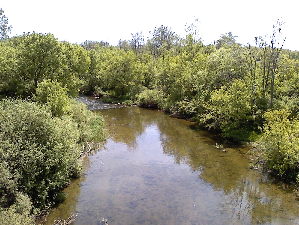 In 1963 the Clinton River, which ran through downtown Pontiac, was covered in cement to prevent flooding. Oddly enough, the Clinton River is the very reason the first settlers came to Pontiac. In 1818 a group of men led by Colonel Stephen Mack came together and purchased 1280 acres of land in what is now central Pontiac, (adding 160 acres in 1822 bringing it to 1440). They settled on the north side of the Clinton River, (then called the Huron of St. Clair), opposite the Chippewa Indians who used to camp annually on the south side while travelling from Saginaw to Detroit for trade purposes. The land of Pontiac was full of life. It was called by some a "forest." There were many trees, including fruit trees, as well as an abundance of wildlife. They settled by the river to use the water-power for their mills. They built a saw mill and a flour and grist mill. They also built a distillery early on as they found it was good for trade with the Indians. Life wasn't easy at first, but they stuck with it and it worked.1

There is recent talk of "daylighting" the Clinton River, meaning they want to uncover it, allowing it to flow above ground through the city once again. I think this is a wonderful idea. Remember the words of Joni Mitchell who sang, "pave paradise and put up a parking lot?" This is literally what was done in Pontiac. The Clinton River is buried under the Phoenix Center and "Lot 9." I'm not saying a river can solve all the cities problems, however consider this--nature shouts with the attributes of God. When we cover it up how do our children explore, not only to see God in the world around them, but to unearth their own gifts within? They learn from teachers and artists which of course is wonderful, but when a generation is far removed from the natural beauty that inspired the teachers and artists from days gone by, something is lost. There is nothing like learning from the Master Artist Himself. What better way to learn math, science, architecture, music or fine arts then by studying from the Creator of these things?

As great as education is, we don't want it to replace experience. We don't want intoxication to replace inspiration, or the work of man to replace the work of God, which leads to idolatry and brings violence into a land. Lord I pray, unearth those things in Pontiac which flow with Your life. Let the earth itself cry out Your beauty for all to see. Let the children see Your works, learn from You and flourish in the gifts You've put within them, bringing honor to You!