The Opening of the Books 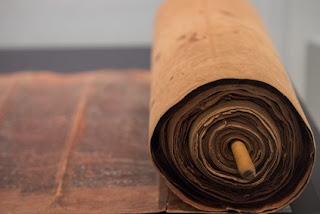 After John ate the book which was open in the hand of the angel who stands on the sea and the land, he was told to prophesy concerning many peoples, nations, tongues, and kings. This angel had brought the open book down out of heaven. (Revelation 10). Ezekiel also ate a scroll, and afterwards he was told to go the house of Israel and speak God's words to them. (Ezekiel 3:1-3). There are books in heaven which contain the destinies of people and nations. From these books, the purposes of God can be prophesied, causing them to happen.

"Lord, I ask for the books that are in heaven which record Your purposes for Waterford be opened. I (and anyone who prays this prayer from the heart) make myself available to receive Your words and Your will for Waterford. I want to know what was on Your mind as this parcel of land was being created. What did You envision? What was (and is) in Your heart concerning this land? What have You written down and decreed for Waterford--the people and the land?"

I've felt for many years now that Waterford is to be a place of hospitality. A place of refreshing where people travelling through can receive rest and encouragement--spiritually as well as physically and mentally. Recently I've seen His desire for unique businesses to rise. Businesses that meet basic, common needs in a creative and refreshing way. Yet it will remain primarily a place for families, with education and government supporting strong, godly families. These strong families will be the reason for strong churches in the region.


Posted by RoseMurdock at 9:56 AM 0 comments

The Sound of Liberty

I'm ending this three year period of "re-prayers" with a re-posting of the last blog to be re-prayed. It is still quite timely for today. The sound of TRUTH is the sound of freedom. Let truth ring in America!

May 1st was the National Day of Prayer. As I prayed for the United States, I found myself praying that God's full and true purpose for which the USA has been established be revealed. By the revealing of it we will be able to get in on it. Daniel sought the Lord after he read in the prophecies regarding what His plan for Israel was in setting them free after seventy years of exile. (Daniel 9). Just as Daniel had been searching the prophecies, there has been a fresh desire rise in the hearts of the Christians in America to return to the purposes for which this country was established. We've been uncovering a lot regarding God's plans and the place of Christianity in our foundation.

Once Daniel found God's plan he sought the Lord in prayer, fasting and repentance. He petitioned the Lord for forgiveness, to fulfill the prophecy and return His people to their land. We too, as Christians have been praying and seeking the Lord. After Daniels prayers the angel Gabriel came to bring understanding. He brought great insight into God's timeline. I believe we need to be open for God to show us His full and true purpose for the United States of America. I believe we need to look upwards and receive His enlightenment as to what His purposes are for us. As we see His plans, we will be able to take our part in those plans. Yes we must search the Scriptures and the historical documents, yes we must pray and seek the Lord with humility and ask Him to fulfill His plans, but we must also open our eyes and see the answer when He brings it to us so we can take our place and do our part!


I pray that our foundation be even stronger than it was in the beginning so we will fulfill God's purposes for establishing the United States. Two thoughts that came to my mind as I prayed on May 1st were the Liberty Bell and the Statue of Liberty. God established this country as a free country, however we know that true freedom comes only from the Spirit of the Lord. We might be independent, especially from oppressive religion, however we must never be independent from the Spirit of God which brings true liberty.


The crack in the foundation of America's liberty will be restored when we discover our true and full purpose!


"Proclaim liberty throughout all the land unto all the inhabitants thereof. Lev. XXV X"


The Liberty Bell has had troubles from the start. It was recast twice. It had cracking problems from the beginning and people didn't like the sound of the bell. Some people who lived in the vicinity of the bell became annoyed with the sound of it. Eventually it suffered a fatal crack on February 26, 1846 on George Washington's birthday.Do we agree with the sound of liberty? Do we try and make it sound pleasing to us instead of accepting it for what it really is? Does the sound of true liberty annoy us? Today, because of its condition, the Liberty Bell is gently tapped on certain occasions and not rung. I pray that as our true and full purpose is revealed and embraced by God's people that the sound of liberty is carried throughout the land by the Spirit of the Lord. Proclaim liberty throughout all the land!

Read more about the Liberty Bell history by clicking here

2 Corinthians 3:17: Now the Lord is the Spirit, and where the Spirit of the Lord is, there is liberty.
Posted by RoseMurdock at 2:50 AM 0 comments