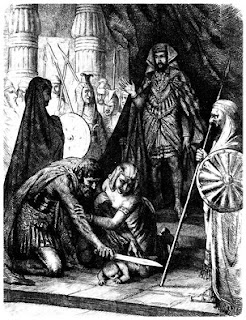 I felt impressed to pray concerning judges and teachers. We are in the midst of the Supreme Court nomination for Judge Brett Kavanaugh right now. There is a fight going on over this position.

1 Kings 3:16-28
Two women brought their babies to King Solomon. Both had babies, three days apart. They lived in the same home. One woman laid on her baby while sleeping and he died. She swapped babies during the night and tried to claim the living baby was hers. They came before the king and he said to cut the baby in half and give both of the women half of the baby. The real mom said no, to let the other woman have him so he can live. By that the king knew she was the real mom and gave the baby to her.

I felt the Lord say through this that we need judges who don't just do what appears to be fair, but what is right. There are some crying out for what is fair, but not necessarily what is right. Fairness sometimes sounds good, but isn't always the right thing. In this case, one woman shouldn't have to have her baby killed just because the other one died, as horrible as that was.

"Father God we pray, in the Name of Jesus Christ, for truth, righteousness, and justice to prevail over man's idea of fairness. That we have judges from the Supreme Court on down to the local level who will stand for what is right, not just what is fair according to the cry of man. Those who are not judging by emotion, but judging according to truth and righteousness. Let them have the wisdom of Solomon. Place people into judgeship positions that will judge according to Your standards, all the way from the Supreme Court on down to local positions. Begin to remove those judges who listen to man, and follow after man, and replace them with those who judge according to Your standard of truth and righteousness. Remove and replace. Remove and replace. Begin at the federal level, and all the way down to the state, districts, county, and local levels. Remove and replace judges. Place Your judges in place who stand with integrity, truth, righteousness, and the wisdom of Solomon. Raise up these judges. Strategically place them in positions of influence that will impact our society for You and Your standard of righteousness."

In our education system there has been so many layers of government placed over our children in schools that the rights of the parents are being interfered with. What started as a teacher assisting parents in education has turned into the creation of principals, superintendents, local district boards, state boards of education, and a federal department of education. Layers of government over our children. Parents are the ones responsible for educating children, not the government.

Proverbs 1:8 says for children to hear their father's instruction and not to forsake their mother's teaching. Instruction and teaching are meant to come from the home--from the parents. That is God's standard. In Genesis 18:19 the Lord said He had chosen Abraham, and that he was to command his children after him, so that God's purpose would be fulfilled in him. God chose Abraham for a purpose and it was a family call. He needed Abraham to teach, instruct, and guide his family in the ways he, and they, had been called.

We are to teach our children the ways of the Lord, but also the ways of the family call and their specific place in that. Of course, some may appear to leave the "family" call, just as Abram was called to leave his father's house and go to the land the Lord showed him, but there are aspects of the family call each child is to fulfill. Some of it may be generations back. They may appear to be going their own way but they are fulfilling a family call from generations ago. In any case, the parents, and even the child, are the ones who will know this the best, not the government.

The parents are responsible for training the children according to their gift and God's call. Childhood is the time for them to learn this. Proverbs 22:6 says to train up a child in the way he should go... When they are young is when they need to learn the way they are to go. This should come from parental and family influence, not governmental or political ideas.

Layers of government have duped some parents into thinking the government is responsible for training their children. In reality, the government is infringing on the rights and responsibility of the parents. The schools have decided the curriculum and the social ideas they are going to teach the children and don't want the parents to interfere. They hide it from parents or tell them they can't fight it if they question or object. Many parents, especially younger parents, think that the government is the one responsible for their child's education. They think that is the way it is, but that is not true, the  parents are responsible--legally and before God.

"Father God, we pray for the educational system in our country. We ask that You dissolve the layers of government that don't need to be over our children. If we don't need a federal department of education then dissolve it. If it is interfering with Your plans, dissolve it. We pray for Betsy DeVos and those in the department of education, that they line up with Your truth and Your plan for the educational system in our country. Remove and replace those who oppose Your ways. Those who oppose the parent's right to raise their children. Bring in those who are willing to work themselves out of a job if necessary. Not just in the federal level, but state and local levels too. Remove and replace. Remove those opposing traditional family ways, who are in favor of governmental and socialistic agendas. Replace them with those who stand for truth and righteousness.

We pray for the upcoming elections--for the judges and educational positions. You are the One who puts one up and takes another down. (Psalm 75:6-7). Promotion comes from You. We need to vote, but do what You do to turn our judicial and educational system around so it reflects the family values You intend. Turn this election to go according to Your ways. Wake up up the parents so they will take back their children and stand against the monster of governmental influence over their kids.

We pray for homeschool families. We pray for strength, wisdom, resources, and protection. That the laws that try and prohibit us from homeschooling be defeated--for Michigan and all the states. That those that would try and take this right away be shut down. Homeschooling is not a right granted by government, but by God. Let parents realize that they have the right by God, and this country, to school their children as they see fit. It's not a right given by the government and the government can't take this right away, I pray for the homeschool coops that give support to homeschooling families. That they have all of the strength, resources, guidance and direction they need to assist these families.

We pray for the judges and teachers Lord. Let the tides begin to turn in favor of Your ways in America. Forgive us for the neglect of our children. For allowing this to happen. Empower us now with courage, strength, and resources to stand against those opposing forces that are trying to rob us of our freedom to do what You've called us to. This is about us having the freedom to live according to how You've called us. By Your grace and mercy let the church arise. The remnant. We ask for Your favor and blessing on this country--on the judicial and educational system so they line up with Your ways.

Turn the tide for the young generation. The elementary, middle school, high school, and those entering college. Turn the tide for them. Let them know when they're being lied to and when there are attempts to deceive them. Let them learn to follow their heart, to follow You speaking to their heart, to value and follow Your guidance. Fill them with Your Spirit from a young age. Let the breath of Your Spirit go to the preschoolers and babies, filling them from a young age. Let Your Spirit guide them, protect them, and teach them. Let Your people wake up and see the truth, becoming sick of the lies and the petty accusations, the false accusations. Let them vote for truth and righteousness, and speak of truth and righteousness. Let the patriots of America become patriots of Your kingdom, and let the patriots of Your kingdom be patriots of America so we can fulfill the destiny You've called us to.